High-speed photography is a kind of photography that tries to capture moments invisible to the naked eye. The most common high speed photography examples are objects drilled or cut in two by bullets, or falling drops. Personally I have always been fascinated by drops. The almost endless dynamics that occur, make each session a unique and thrilling event. Who didn’t, at least once, try to photograph a falling drop? Usually you take a few shots to try out and then stop. If instead you become passionate about them then you’re done! You start to take thousands and thousands of photos just to trash the 99% of them. If passion becomes a mixture of passion and obsession then you go to the next level, trying to figure out the mechanisms that regulate this fascinating world. The basic element in this kind of photography is water. Every living being recognizes a special relationship with water, men in particular add a psychological component to their relationship with it. It has always been recognized as a vital and indispensable element. Water, despite being composed just of three atoms, two hydrogen and one oxygen, shows a series of properties that allow it to be one of the elements necessary to life as we know it. One of the most interesting and curious, as well as one of the most important in high-speed photography, is the surface tension. Surface tension is generated by the molecular cohesion forces inside a liquid, water is the fluid with the highest surface tension value excluding mercury, this being a liquid metal at room temperature. In the absence of external forces, molecules tend to arrange themselves in the configuration of  smaller surface represented by the spherical shape. A drop of water in free fall tries, for this reason, to assume a spherical shape; a broken mercury thermometer is the most common and funny experience related to surface tension that most of us have surely noticed, in fact observing the leaked droplets we noticed how, thanks to the extremely high surface tension, they were perfectly spherical. Surface tension in water is about five times more stronger than the force of gravity, this characteristic is the foundation of capillarity that allows to the tallest trees to be able to convey water from the roots up to the top. Surface tension is correlated to the temperature of liquid, in example water shows the following surface tension values along with temperature variations:0°C 0,00756 N/m20°C 0,00726 N/m50°C 0,00679 N/m100°C 0,00589 N/m.A major variable in controlling the surface tension is represented by surfactants, substances capable of loweringthe surface tension of water in an important. They are used for example in the detergents sector, inks and emulsifiers. The huge number of variables that come in play prevents to address the problem in a more rational way, in order to study the most interesting effects around a table. You must rely on your own experience, your instinct and a big bunch of creativity.The preparation of the set, made of backgrounds and flash units, must also take into account optics along with the fluid dynamics. You have to deal with a transparent or reflective liquid, or with both features at the same time and you have to try to keep it under control. In this case we have to plan, in broad terms, what we want to photograph and what result we want to achieve. This depends roughly in planning:

A drop falling into a container full of water has approximately the following behavior: 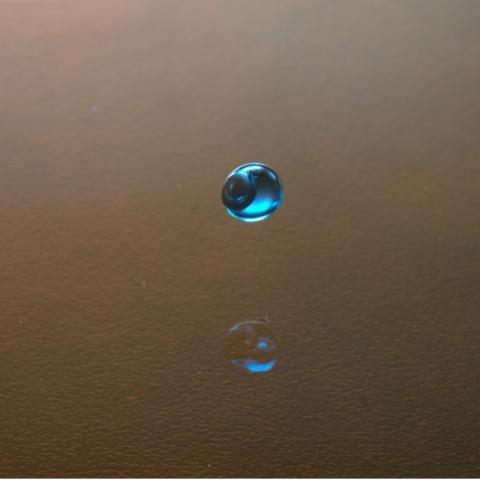 1) the falling drop approaches the surface; 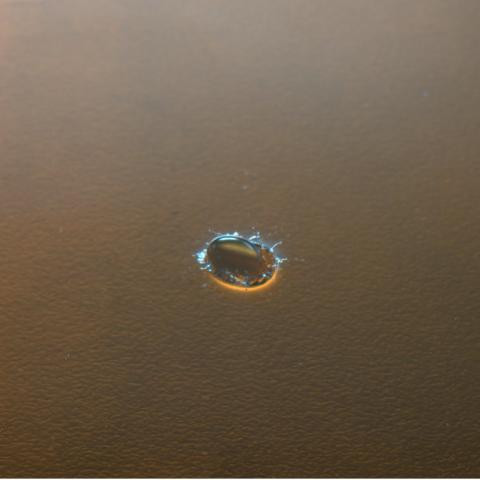 3) the drop continues its downward descent slowed down by the underlying mass of water, the walls of the crown start to rise; 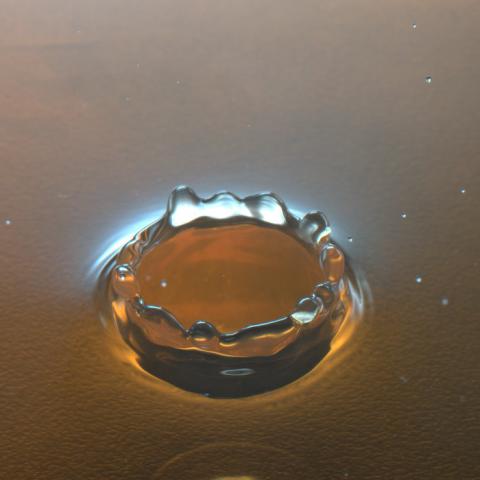 4) the impact creates a well, crown walls collapse under the call of the surface tension; 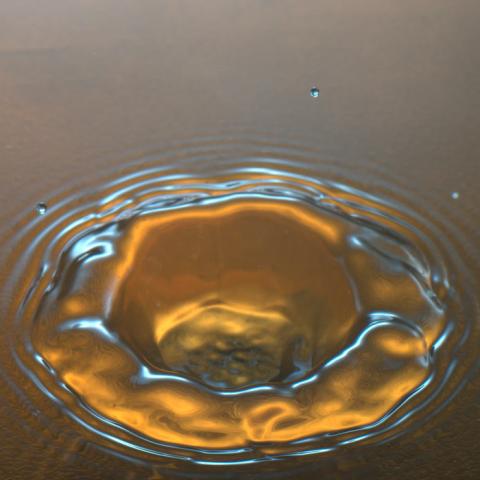 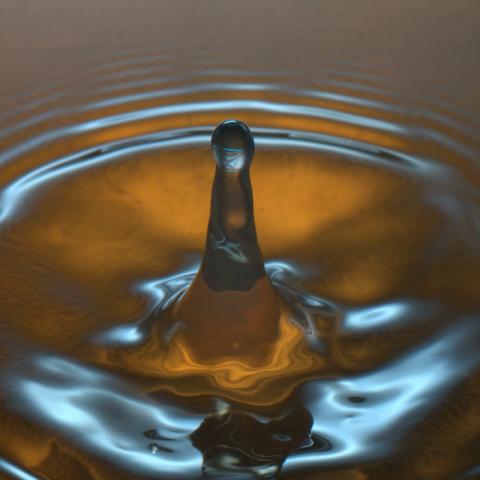 6) the water is pushed upwards to form a pillar; 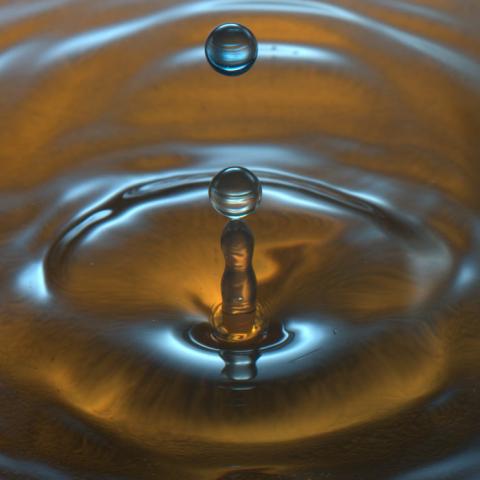 7) the pillar top pinches into one or more spheres because of the surface tension, at the same time gravity is puling everything downwards 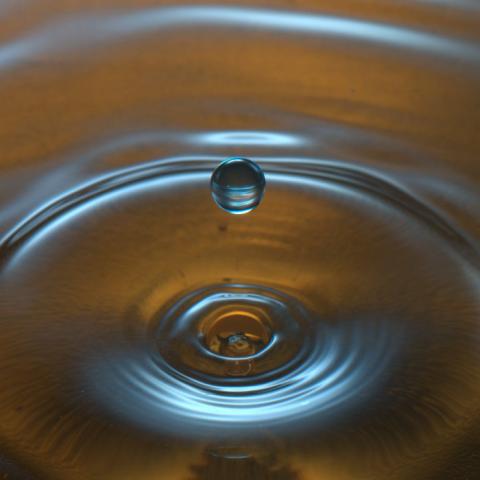 8) at this point the gravity wins over the other forces at work and lets everything to fall back to the surface; the show is almost over 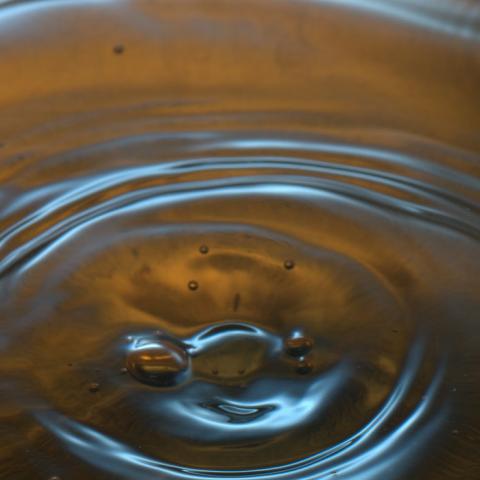 9) the water surface gets back to its natural still state: game over

The surface tension, when varied, will deeply change the sequence; adding a little bit of surfactant into the water will produce taller and thinner pillars at point 6 and 7, along with less spheres detaching from the top.

Many, amongst you, might have recognised from this sequence, which lasts around 50ms, some similarities with their own experiments in the kitchen sink or in the bathtube. Even if it’s a basic and simple sequence you can play a lot with it, varying the framing, the lightining and the background reaching good results in a short time.

Imagine, at this point, to let another drop fall with a few millisenconds delay and make it impact, somewhere between the point 6 and 9, with the evolving sequence. From this point on, since it’s almost impossible to keep under control the countless variables at work, you have to rely on your own technique, creativity and fate, which during the worst sessions will make you sweat just to have to good shots, some other times everything will be perfect at the first shot. 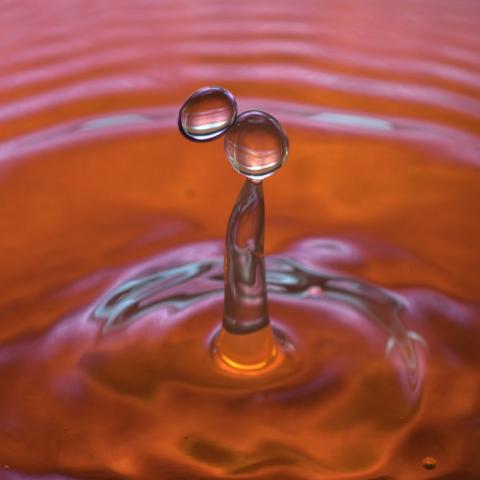 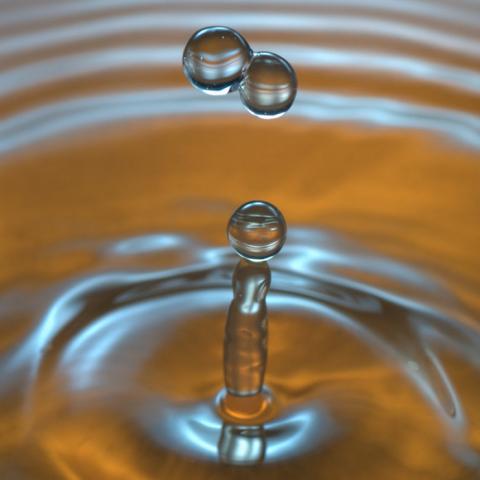 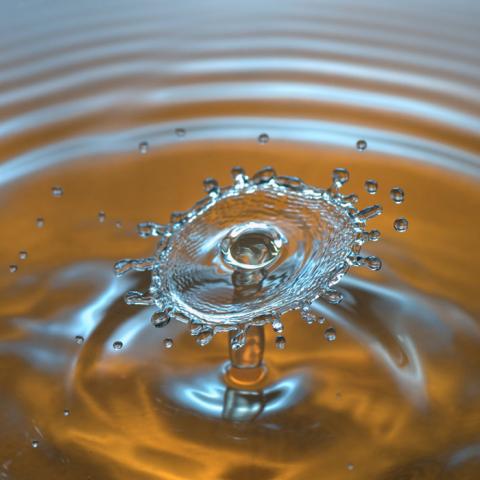 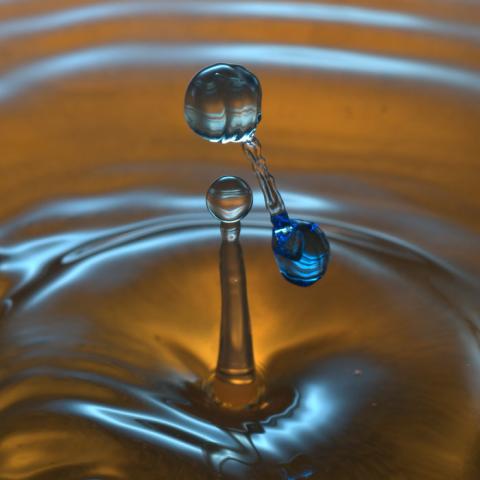 How can be pictures made? There are several ways, more or less sophisticated and more or less precise and deterministic. A camera with a remote is the very minimum set to face such a challenge. You need lots of patience and very good reflexes.

Eletronics is a valid aid and it doesn’t interfere with the creative part as someone could object.

The very first step to barely simplify the challenge is to build a delayed photosensor, it simply waits a preset amount of time after the first drop passes through it and then it triggers the flash unit. Different kits can be found on the market for hundreds of Euors, ready to shoot and very sophisticated, driven by microcontrollers leading to an absolute precision in the timing. My DIY set is made of by a simple public domain circuit that can be found here (http://www.hiviz.com). It is simply an infrared switch that gets interrupted by a passing drop and triggers two Vivitar 283 flash units set up to emit an 1/30000s flash. The whole thing is roughlt set up using two knobs which I can deal with since I am get used to them.

The set is kept in dim light since I shoot using the open flash technique, since my circuit can’t pilot the camera shutter. My typical sequence boils down to put mt camera in B mode, let some drop fall using a syringe and after the flash have been triggered stop the exposure.

Talking about lenses, my suggestion is to use a macro lens, if available from 90mm up, otherwise the frontal lens could be way too close to the drops and get dirty. One or two external flash units are nice to have so to have more room in the creative part; their flashes have to be emitted at once, the faster the better,  otherwise some details could be microblurred or not crisp, sometimes 1/20.000s is not enough, in particular when it comes to  the droplets thrown away by the impact; in the end if the flashes wouldn’t be set to emit same lenght pulses we would end up having a double exposure because of the overlapping of the two pulses, like in the followig picture where it is possibile to see the effect all along the crown. 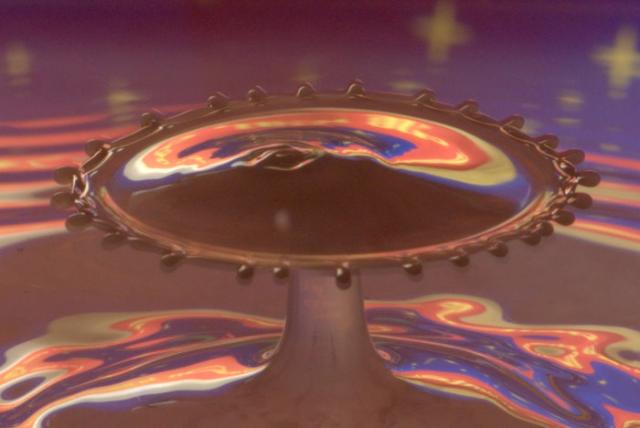 Your creativity can be unleashed to modify water behaviour: detergents, salt, milk, vinegar, glycerol, food colours and whatever water soluble in water you can think of.

During my years of test I’ve learned that the most challenging problem is not to deal with impacts, yet to deal with the photographic part of the set with backgrounds, diffuser and lightning.

A last note: the initial sequence that we studied is true only when the drops collide against a thick layer of water, different behaviours can be appreciated, talking about morphology and duration, when the impacts happen against a shallow layer of water.

That’s up to your curiosity to find it out!