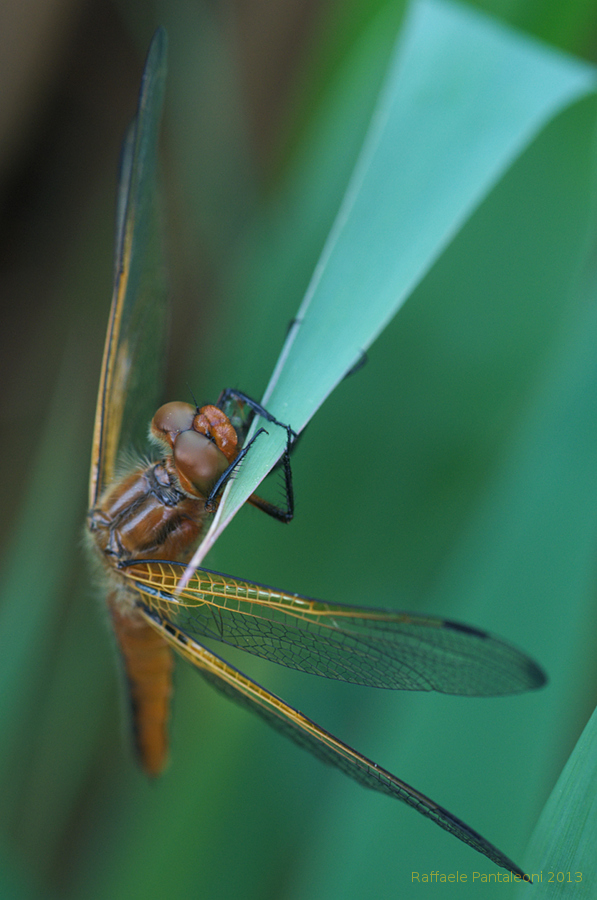 As we all know when we go out in the early morning, before dawn, by the heat, cold, or wet: there is no certainty to bring home a decent shot. However we keep doing it every time, out of passion, tenacity, stubborness, love. Then on a plain, ordinary anything can happen and when it happens we feel an odd sensation of childish joy mixed with euphoria. The camera disappears in our hands, it becomes a window through which we make flow images bouncing around from the brain to the heart. Today, to me, was one of those special days. I left home early in the morning (dawn was at 6), I arrived in the shed at 6 o’clock. Flat calm. Around 7 a hawk pulls up a fish and as it leaves it is stalked by a seagull who wants to steal its breakfast, despite the 3200 ISO my D300s can’t persuade the 1.4x multiplied Sigma 400 to prevent blur … “It will come back” I tell to myself. 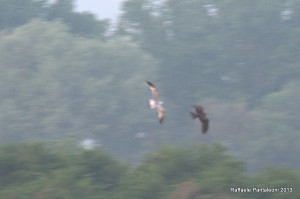 Meanwhile Warblers begin to fill the air with their awkward singing. As I follow one of them passing beneath the shed, I see a dragonfly waiting to warm up the engines to go, “Oh, finally! The first dragonfly of the year”. I take some pictures just in case, while waiting for the hawk to return. 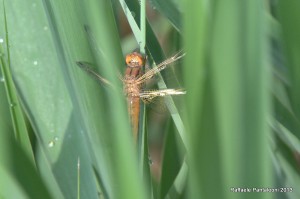 I wait a little more, in the distance two (2!) couples of great crested grebes start, simultaneously,  the initial stage of courtship … “Wouldn’t you get a little closer?”. At 8 o’clock I start to convince myself that the day will be as dull as the sky hazy and hot from sirocco wind blowing. Tired of shooting to kill time I think to myself, “How about to take a look to the other hut, on the pier, looking for others dragonflies?” 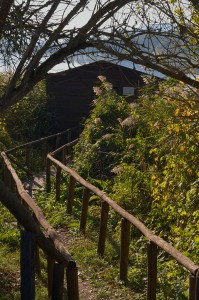 As soon as I arrive to the hut I see a dragonfly  on my left side, I freeze and put the tripod on the ground, then I focus and compose then I take a shot with the 1.4x multiplied 400mm lens. 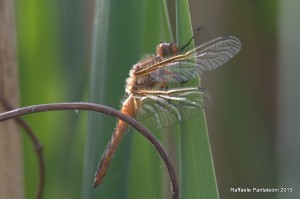 “Nice, maybe I can get a little bit closer just to see if I can get a picture without using the 1.4x conveter on the 400…” 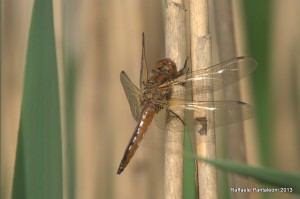 “Nice shot …” as soon as I take my eyes off the display I notice another dragonfly to my right side…  I do not believe in luck so I begin to rise some questions in my mind. Being incredulous I start to notice dragonflies everywhere, I can count at least fifteen of them in a few meters, suddendly I feel a strange kind of euphoria. I feel like a child at the funfair who doesn’t know on which amusement ride to start so he wants to try them all together! Calling on my self-control I start to shoot, as I’m used to do when dragonflies are concerned, with great caution and circumspection … the 400mm, for some closer dragonflies, is too long though … “Should I dare to take a picture using the 90mm lens?” 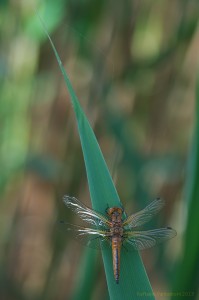 As soon as I put the 90mm on, I begin to approach them, not too slowly,  leaning over from the pier.  “Damn! It didn’t even move! Maybe I can get a little bit closer .” 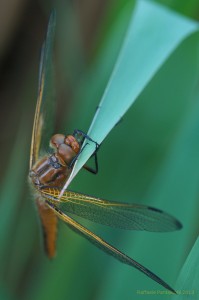 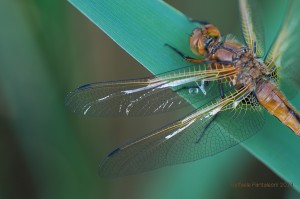 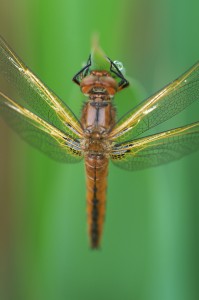 “Mmmmmh … I have got the extension tubes in the backpack… Come on, who cares! Take that or leave it! I put on just the 20mm tube, so I do not get too close.”

“What the… they do not move! Maybe they are completing their metamorphosis right now. Most probably I can even find the exuviae still attached on the reeds.” 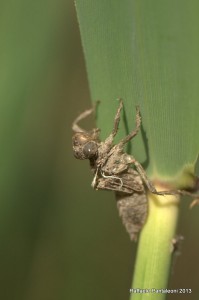 “BINGO!” I could not believe it! I spotted the exact moment when many Libellula fulva specimens left their underwater life to become part of the upper world. After I realized that these splendid specimens were waiting for the wings to support them in flight and were probably still “dazed” by the new world, I have lost all inhibitions. During two hours I took over 500 photos, made ​​at least 8-10 lens changes, tele conveter, extension tubes … I also took pictures using my mobile phone … I was completely in the grip of an utter euphoria and ecstasy, in some circumstances, I found me talking to myself  in a loud voice,luckily I was alone… I was able to take this superb wing detail using the Tamron 90 coupled to 68mm extension tubes going up to a 2:1 ratio. This setup brings the lens a few centimeters from the subject … I’ve bought them to take flower extreme close-up and now I am using them to take picture of  dragonflies … I could not even believe it … “Was the picture worth it?” you might be wondering, judge for yourself! 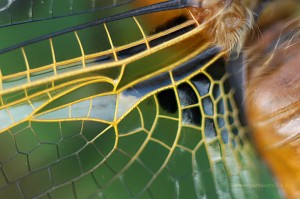 I almost forgot the picture taken using the mobile phone…