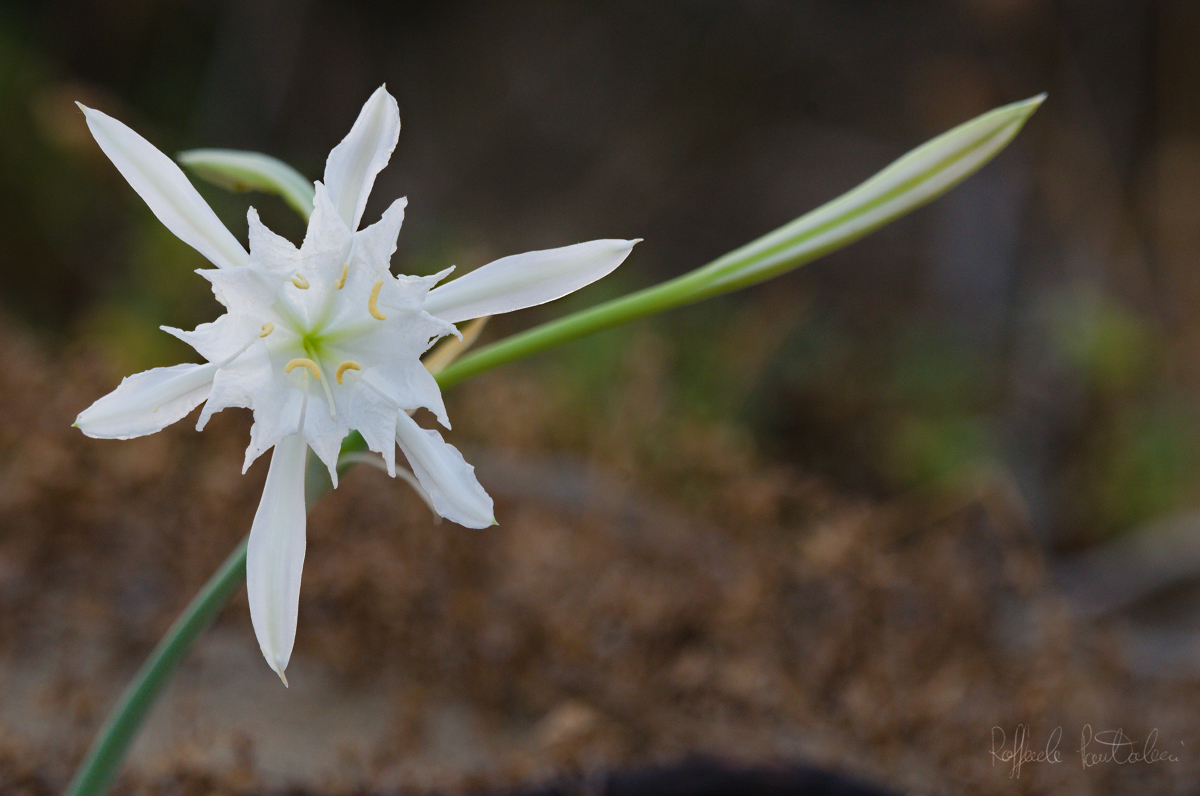 For some years now I have the opportunity to spend a week in August on the seafront of Sabaudia, in the Circeo Natural Park territory. Precisely on the coast near the coastal lake of Caprolace and the Pantani dell’Inferno (Hell swamps) natural reserve, which, despite its name, it is an important wetland recognized by the Ramsar convention.

In July and August, on the dunes colonized by the Sea cedar (Juniperus oxycedrus macrocarpa) and by other highly adapted species to stand the hard life on the sand, the wonderful Sea lilies (Pancratium maritimum) bloom, also known as Sea daffodils. These plants have nothing in common with the lily, except for the sweet and persistent scent that spreads all over the beach in the early morning and at night, when the wind is a light pleasant breeze.

The flowers are white and very large, they can reach about fifteen centimeters in length, about eight centimerters of maximum diameter, plus fifty centimeters of stem. They exhibit a double corolla, the outer one consisting of six petals, the inner one trumpet shaped from which stamens and pistils take shape, the latter longer than the stamens to avoid self-pollination, pollination that occurs at night by moths .

Their candor gave rise to the legend that a milk sketch of Hera (Juno for the Roman), sucked too hard by the infant Hercules, flying in the sky has formed the Milky Way and falling on the ground has given rise to the Sea lilies.

The Sea lilies are among the plants that rely on the sea to transport their seeds, they can float for long periods and distances indeed (hydrochoric dissemination, the Coconut uses the same strategy).

They are spread all over the Mediterranean, Portugal, part of the Black Sea coasts, South Africa (from which they seem to have originated) and California.

They are not damaged by pests, except for the voracious Brithys crini caterpillars (nocturnal moth whose larvae feed on lily), in 2016 represented a real scourge for the lilies.

Over the years I have tried many times to photograph them. For those who know my way of photographing flowers, I don’t take shots in order to assemble a manual or a field guide.

I like to think of being able to capture the ephemeral essence of flowers, almost transposing their delicacy and etherity onto the photographic support. This does not always happen; it is complicated to photograph one of the most inflated subjects without falling into deja-vu or encyclo-documentaristic photo.

I try to make the flower filter through my sensitivity, visualizing it before photographing it. Making it, if possible, even more ethereal and delicate than in reality.

It is a kind of idealization, a snapshot of an idea that finds fulfillment in the beauty of shapes and colors. They can be details extrapolated from the context, spots of color or the whole flower: the “what” is not important, much more is the “how”. “How” meant from a visual point of view, not technical. “How” I see it when I click and “how” I would like others to see it, even if the right word should be, “perceive”.

This year, thanks to an extremely and unusually abundant flowering, with hundreds and hundreds of lilies along the various kilometers of the coast, I engaged myself with greater attention and stubbornness.

I start with morning shots, before and during the sunrise, but apart from the vaguely creative use of the sky and pink clouds, the pictures are not satisfying.

Following the advice of a great photographer and close friend, Marco Antonini, who is to me for flower photography what is Silvio Renesto dragonflies photography, that is an absolute mentor, I go to photograph at sunset.

Unfortunately, from the previous evening, a taut and steady Mistral wind is pounding the coast in an incessant and merciless manner.

Result: as soon as I arrive at the beach I am seized by a feeling of despair, the fragrant and immaculate groups of lilies are tore apart, only the stems and the not yet blossomed buds remain, along with shreds of petals.

With just under an hour of light available, I begin to wander around the dunes in search of survivors.

The resistant juniper bushes have protected many lilies, though battered by the wind, stand stoically.

It is a real challenge, both creative and technical, due to the limited time, the difficult position of the surviving flowers and the undaunted Mistral that continues to sweep the coast, without rest.

The wind is so strong and constant that an annoying flow of sand lashes me and the camera so hardly that I struggle to keep my eyes open on several occasions.

The flowers are in such improbable and uncomfortable posistions that to take a couple of shots I have no other solution than to dig a small hole in the sand where to lodge the side of the camera to lower the point of view and have the vertical cut I’m looking for.

I am armed with the Tamron 90 macro and the Sigma 150-600, both of which are able to produce a really pleasant bokeh; I came with the intention to exchange them several times upon the chances, but the sand that tries to slip everywhere forces me to do only three changes, carried out in a way that goes far beyond the normal caution.

The tripod that I have brought is only a burden that I leave to take the Mistral on a dune. The spaces are so tight and uncomfortable that even the flexibility and modularity of my 055x ProB would be a hindrance. I choose not to use it.

The best photos are taken with the Tamron at the end, perhaps this does not depend only on the particular weather conditions but, probably or mainly, on the fact that the Tamron is a lens I have owned for ten years, which I know deeply and from which I know precisely what to expect, what I can ask to it and what not.

The burst of the D300s is necessary as well as the AF that is able to cope with the flowers being rattled tirelessly. I wonder how they can not disintegrate before my eyes…

In the end I can take out several shots that I had in mind and in my heart, one in particular exceeds my expectations at the exact moment it appears on the display of my trusty D300s.

There is everything that I wished for, a background that brings out the sinuous curves of the petals and the corolla, the backlight outlining sharply and gently the delicate silhouette, the reproductive structures that seem to give rise to the Sun perfectly laid on the corolla.

For this photo the burst was decisive, you see a quick of part of the burst, I am literally planted in the sand, practically immobile, the movements are associated with the wind. The D300s is capable of 7 frames per second, the shots are all taken at around 1/3200s, that’s easy to understand what the power of the wind was.

Was it worth it?

Obviously yes, it was, I would do it again (and I’ll do it again) a thousand times.

Is it not such satisfaction that pushes us to take pictures maybe?

P. S .: Are you thinking that, perhaps, I could have exaggerated a little bit about the power of the Mistral? Judge for yourself …